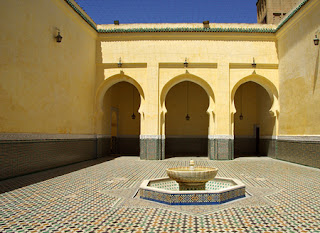 A short distance from the famous Rabat and Fez , Meknes is a little Moroccan jewel ready to show its beauty to visitors. The city is called the Versailles of Morocco for the palaces , mosques , stables and the beautiful gardens that adorn it .

The Sultan Moulay Ismal in the seventeenth century chose it as the capital of the Kingdom and wanted to make it the most wonderful of the imperial cities , transforming it in less than fifty years in an architectural marvel shining with gold and ceramics adorned of elegant damask patterns . Thanks to the valuble artistic heritage, the city has been included in the UNESCO World Heritage sites .
The tour starts from the Bab Mansour , the majestic wall complex that form the entrance to the city , with a profusion of  decorations that adorn tiles and marbles . 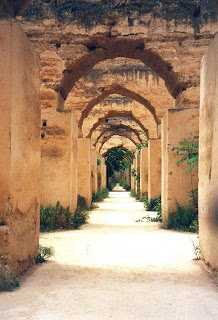 Dar Jamai , 1882, which houses the Museum of Moroccan Art , is a beautiful building adorned with a magnificent Andalusian-style garden with palm and lemon trees, where it is nice to take a break to escape from the heat .
The city tour continues among beautiful buildings covered with arabesque patterns as precious laces and streets crammed with people and perfumes up to the Dar el Ma , the stables of Moulay Ismail . its huge proportions were meant to express the greatness of the kingdom, and the astonishing arch system creating an amazing perspective view demonstrate the engineering skills of the builders and seem to embrace the visitors and carry them into a marvellous maze.
The city tour end up in the souk of Meknes , much smaller than those of Fez and Marrakech but with a more intimate atmosphere and less crowded with tourists : here there is no pre-established path , the key to enjoy it is to get lost in tis maze along the narrow alleys packed with beautiful objects that tell stories of ancient crafts and traditions. 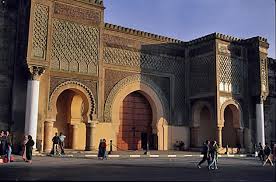 The beauty of Meknes lies not only in the beautiful architecture but also in its position , at the top of a hill surrounded by lush valleys. It’s in these valleys covered with olive and palm trees , about thirty kilometers from the city , that lies Volubilis , the most important and best preserved Roman site in Morocco. The decumannus still shows the perimeter of the shops and houses , with beautiful polychrome marble mosaics , and remains of the baths and therme . The Romans once again surprised me with one of the most beautiful archaeological sites I have ever seen in the middle of the hot Moroccan land . Or maybe it’s the combination of Mediterranean architecture and Moorish atmosphere that makes this place so special , another jewel of this magnificent country that keeps surprising me.